I’ve just found five old diaries in my desk drawer, while looking for sellotape.  I can’t claim to rival Oscar Wilde, I’m afraid.  The dated pages only record appointments or occasionally, report on the weather, there’s nothing to rivet a casual browser.

But these are Mslexia Writer’s Diaries, so each week of appointments is faced by a blank page, and on those I’ve made all sorts of contributions.  There are notes about books I’ve heard will be good reads; over-heard snippets of conversation; ideas for new classes and writing exercises; ideas for stories and workings for plots and short pieces of free-writing, as well as quotes from reading or listening and reflections on classes.

I’ve never managed to keep a regular diary for more than a month or two, but a writer’s diary, that’s something different.  I may not be able to tell you what I had for lunch on any given day, but I remember that I found that quote about Marxism, on the page facing 16th May 2011, while I was waiting for a job interview in a converted Baptist chapel in the city.

The room, at the top of the building, was painted eggshell blue and had only one small round window.  Through it I could see blue sky and hear children playing at the school along the road and seagulls.  There was only just space to move between the filing cabinets, desks and fridge, because most of the floor-space was taken up with boxes of papers.

The job was a fill-in, to keep the classes going for another month before the building was sold, and despite the clutter of test-papers and work-sheets, the building already felt abandoned.  As I swiveled on an office chair, waiting for the manager to sort-out a problem at the front-desk, I picked a history book off his bookshelf and found, as I so often do when browsing reference books, that it was relevant to something I was working on then (Martin Chuzzlewit that term).  So, by the time Henry came back to talk to me I had filled a page of my diary with the quote and my thoughts, and forgotten my nerves.

No, not sensational, I agree, as it stands.  Yet there are a mass of connections I can take from that one rather small page of notes.  It stands for two classes of students, a building, a business, bankruptcy and it’s fall-out, politics, reprisals and bitterness and a hot summer in the inner-city.

Alternately, from another diary I could describe the Cirencester road on a wet February morning because of an interview that caught my attention on Radio 4 as I was driving to a class, or I could remember the way I felt at a funeral in 2009, because I asked the organist for the list of hymns he played in the minutes while we waited for the service to begin.  Looking at that list, I remember not just the man who tried to teach me piano when I was twelve, but also the neighbour we had just lost and a time when I played whist with her, and the way her kitchen smelled of warm milk on frosty mornings. 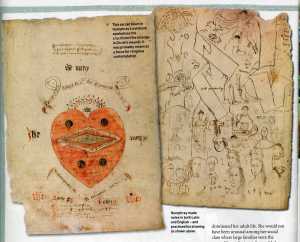 So for me, these diaries are not just collections of notes, or lists of appointments, they’re storehouses of connections to events and days that happen as much in my head as they do on the page, and now I’ve found them again, perhaps I should do them the justice of making space for them next to my other books for research.

Yes, they’re highly personal, and will never occur in that way to another reader, but perhaps, after all, they are in their own way, every bit as sensational as the diary of Cecily Cardew.

And, one last thing, five diaries?  Where did all that time go?