Because it seems to me that the debate on how much story-planning you need to do is contradictory, and therefore on-going, I thought I’d offer these thoughts from a prolific author who died early this year.

When I think of the bone structure of the book…the dramatic presentation as it were – they know they have to get to Lands End and I will not let them go anywhere else.  How they get there is up to them.  They might not get there at once.

You have to know that you are going from A to wherever, but it would be very boring if you knew exactly how you were going to do it.  It is quite interesting to have things happening that you had not envisaged at the start.

And, because, one of the simple ways to ‘force’ a story is to set a character – or two – on a journey, and see what happens along the way.

If you are someone who craves plans, then using a journey will, at least, allow you to plot a route, and the means to get there.  After that, the questions proliferate:  what transport to use?  How much money they have?  Why they’re going…  The list of questions seems as endless as the possibilities of the journey.

Something interesting is bound to happen, isn’t it…

even on the shortest trip?

It seems as if you’ve seen this sight, felt this feeling, had this vision, and have got to find a combination of words that will preserve it by setting it off in other people.

The role of the writer is not to say what we can all say, but what we are unable to say.

All I’ll add is, let’s make a pact, and not procrastinate any longer.  Stop reading, turn off your internet and start writing.

My nephews have toys all over the floor and I hear Sam say to Bevis, ‘Just pretend that I’m up the tower and…’

He didn’t say, let’s pretend, he said ‘just’.  There was no gap between reality and make-believe.  He was standing on the top of the lego tower being threatened by the giant plastic dinosaur and he was working out his action strategy.

On one level, it is that simple, that we ‘just pretend’ when we write stories.  Not only with straight-forward fiction, those of us using our lives as inspiration for stories need to hold onto that thought too, and learn to lie, convincingly.

Why not give it a go now?

Think back to childhood.

Who was your favourite relative?

Write a short description of them.

Now think: what did they do that made them special?  It doesn’t have to be anything fantastic, or exciting.  But try to visualise one event, in detail.  Find the starting point for the story.

Because sometimes a lie makes the best truth.

Where do I start? If only my ideas were straightforward.  Instead, here I am scratching my head and trying to unravel too many different lines of thought.

‘Begin at the beginning,’ the King said gravely, ‘and go on until you come to the end: then stop.’ 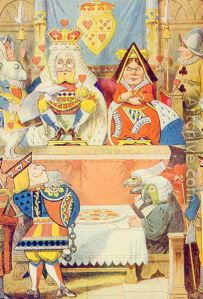 From, Emily Gertrude Thomson’s adaption of Alice In Wonderland.

So, perhaps I’ll start with the source of my inspiration for this week’s ramble.  Aptly enough (says she, with wide eyed disingenuous simplicity) it was the opening lines of a novel, Behind the Scenes at The Museum, by Kate Atkinson.

I exist! I am conceived to the chimes of midnight on the clock on the mantelpiece in the room across the hall.  The clock once belonged to my great-grandmother (a woman called Alice) and its tired chime counts me into the world.  I’m begun on the first stroke and finished on the last when my father rolls off my mother and is plunged into dreamless sleep, thanks to the five pints of John Smith’s Best Bitter he has drunk in the Punch Bowl with his friends, Walter and Bernard Belling.

Who exists?  Why Ruby Lennox, a narrator who has such an all-seeing god-like view of events that from the moment her life begins, she knows everything about her family.  I’m not just talking about her great-grandmother’s clock here, look at what Ruby knows about her father’s movements prior to this conception:  what he drank, where he was and who he was with.  To top that off, she also knows that his sleep is dreamless. If you’ve ever wondered what an omniscient narrator can do, here’s a good example.

Trouble is, Ruby’s not exactly a standard example of omniscience, because she’s a central character in the story.  In fact she’s also a first person narrator, recounting the events of her life, like Tristram Shandy:

‘I wish either my father or my mother, or indeed both of them, as they were in duty both equally bound to it, minded what they were about when they begot me.

and David Copperfield (‘Whether I shall turn out to be the hero of my own life…’) .

Far from god-like, Ruby’s as fallible as the rest of us, with opinions, prejudices, likes and dislikes that colour the way she sees and recalls her life.

“‘Bunty’ doesn’t seem like a very grown-up name to me – would I be better off with a mother with a different name?”

So, engaging as her story is, there’s always room for a little bit of doubt about what we’re reading.  We want to trust her.  After all, the narrator’s role is to show us the way in the story.  That role of route-master can include everything from placing only relevant story scenes in front of us, to directing what angle we view them from and even, making sure we read it as the narrator wishes us to.  It’s easy to forget how much manipulation is taking place when we’re speeding our way down the page.

Okay, this is fiction, and in the world of fantasy, especially this kind of magical-realist text, anything can happen.  We could just accept and enjoy it as comic exaggeration.  But this story’s also littered with misdirection.  Our narrator seems to suggest that fictional characters existed in the same way as historical figures, ‘Robinson Crusoe, that other great hero, is also a native son of this city.’  She’s also under the impression that her birth is so important an event that ,’outside the window, a dawn chorus is heralding my own arrival.’

You could call that ego, perhaps.  She wouldn’t be the only one to believe the world revolves around herself.  The thing is, once we see that, shouldn’t we be a bit wary of taking her at face value?

Real&Raw-Weaving lives together! Pragmatically Quintessential; It's all about falling and getting back up here!

Mental health right at your fingertips