The thing about titles is that they’re tricky.  I know this as a reader, a writer and a tutor.  Titles have so much work to do, and it’s hard to get the balance right, most of us agonise over them.  So I’m always impressed when I find one that catches my attention, intrigues me and suits the content it’s selling. 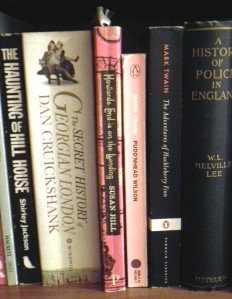 Howard’s End is on the Landing seemed to leap out from amongst the other titles in the shop. I glanced at the author, and remembered that Susan Hill wrote The Woman in Black, which I’d heard on the radio, but not read, and tried to remember if I’d read anything else of hers as I turned the paperback over.

The opening lines were a jolt:

It began like this, I went to the shelves on the landing to look for a book I knew was there.  It was not.  But plenty of others were and among them I noticed at least a dozen I realized I had never read.

Further down the page, I read:

A book which is left on a shelf is a dead thing but it is also a chrysalis, an inanimate object packed with the potential to burst into new life.

I had wandered in to browse with no intention of buying, so what was it about that title that stood out?  Why was it the only book I’d bothered to pick up and look at?

Well, it made me smile (and still does).

I made the link to E.M. Forster, before I’d picked the book up, and was already wondering if that was intentional, but if so, in what way?  Maybe the book was a literary investigation into the novel, Howard’s End, in which case I was half interested, because I like a bit of literary research to aid my reading.

But, what possible link could there be between a classic twentieth century novel and ‘the Landing’? I couldn’t imagine that.

So, crazily, what I was also expecting as I picked up that book was to find it would be a story about a man called Howard coming to his end on ‘the Landing’ (and I still think it would make a cracking title for a golden-age murder mystery).

The thing is, the title was the lure that got me to open the cover and read those first few lines that hooked me so securely that I bought the book, read it, and have now put it on the shelf in my hallway.

6 thoughts on “Howard’s End is On The Landing.”