Late on Saturday afternoon we were all stuck on the word wheel.   When I say all, I mean the three adults sharing coffee, biscuits and gossip round my brother’s kitchen table.

Sam did leave his lego for a minute to watch me tearing some scrap paper into squares and writing out the nine letters, but he was right in the middle of something really important.  We showed the wheel to Milly, coming in to grab a biscuit and ask a question about her homework.  She laughed, shrugged, and took a couple more biscuits for later.  ‘I need the sugar for concentration,’ she said.

Despite the biscuits, we still hadn’t figured out how the nine letters should be ordered fifteen minutes later, when it really was time to get home.  The best I could come up with was UNVAPOURS.

Later I found my word on google, but without a definition: so that was unsatisfactory.  Anyway, like Milly, I had homework to finish.  So, some you lose, I told myself as I settled down with the bones of a lesson plan.

Early on Sunday morning I got a phone call from my brother.  ‘Sam’s just solved the word wheel,’ he said.  ‘He was making words out of those letters you left on the table and writing them down.  He got SUPER, VAN and then NO.  What do you think?’

I think, sometimes you need a fresh view of a problem. 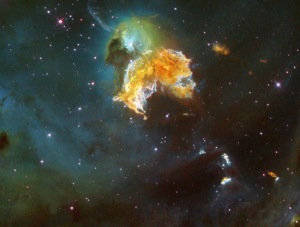 Supernova remnant N 63A lies within a clumpy region of gas and dust in the Large Magellanic Cloud. Image created by NASA and ESA