I’ve just picked up on a challenge laid down for me a month ago, and read some of the absurdist stories of Daniil Kharms.   Thanks Mike, what a find, and how have I missed him before?

Literature is my favourite form of travel.  Think of the efficiency.  No hours on the road, or waiting around for connections.  Step between the lines of a story and I’m away.  The infernal combustion engines might transport us across the geographical world, but I’ve just travelled back in time, and got dunked into Russian culture.  No tourist destinations for me. 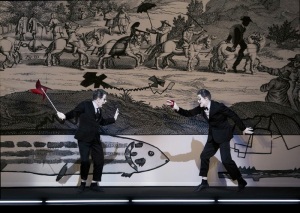 These Kharm stories read in a flash, resonate for hours.  They’re ridiculous, funny and dark.  Death slices through the lines of plot, taking out central character after central character.  The early twentieth century Russian landscape is grim, even bitter.  ‘Good people are not capable of getting a good foothold in life,‘  concludes Kharms, in his 1936 story, The Things.  I sense layers of suggestion, of anger, behind the flying dogs and missing legs, the drunken binges and vanishing brothers.  Like dreams, they sketch scenes, distort reality, break the rules.

These characters and their deeds twist my understanding of the world,  my sense of self and reality.  It’s brave, risk-taking writing, and I can’t predict the outcome of any piece.  They stop.

I think on, and see that sometimes writers need to be brave, and leap.

7 thoughts on “Embracing the absurd.”