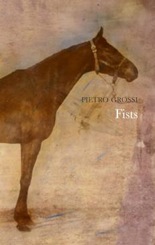 I begin with a big THANK YOU to Fiona, who passed Fists on to me.  Fists being a book of three stories by the Italian writer, Pietro Grossi.  Not, I hasten to add, in the original language, but in a translation by Howard Curtis.

Having just finished the final story, I feel I’ve been to Italy.  Not skimming across the surfaces that tourism offers, you understand, I’ve experienced the world as lived by three Italian men, and it wasn’t what I expected.

Yes it was macho, there was boxing, there were horses and blood-letting, but there was also variety and insights.  I found passages I wished I had written.  Look at this, ‘He was like a Greek statue in motion, with the same rigid still perfection.’

I wasn’t sure which centuries all three stories were describing.  Horses might have been in the last one, or maybe the one before that.  It didn’t matter, I was in that valley accepting that the most technological innovation mentioned was a shotgun.

In these versions of Italy the women were mostly shadowy, even when exerting power.  Seen from a male perspective, maternal influences are questionable, maybe a challenge.  Yet, in the absence of a mother, what happens to two small boys and their father?  What kind of men will the boys turn into?

Reading Boxing, reminded me of Nick Hornby’s Fever Pitch.  Despite the fact that I know only as much about either football or boxing as any media savvy person absorbs by accident, I read every jargon-laden word of both texts.  Why?  I think it was the enthusiasm of the narrators, who not only hooked me, they swept me along with them.  I’m still not a fan of either sport, but I’d be happy to read both again. Besides, don’t make the mistake of imagining either story is entirely about sport, both are character driven.

Here are the opening lines of Grossi’s short story:

Let’s get this straight: I really liked the whole boxing thing.

I don’t know what it was, whether it was the sense of security or the awareness that I was doing something the way it should be done.  Maybe both, maybe also the terrific feeling that there was a place where I had what it takes, where I could fight on equal terms.

It quickly becomes apparent that our narrator is a nerdy adolescent boy.

One day, I told my mother I hated the piano.  Music was fundamental, she said, it gave you discipline.  Discipline.  Why discipline?  I was the most disciplined child in the world.  I was so disciplined, I’d almost vanished from the face of the earth.

Before you start guessing about the significance of this domineering mother, read this segment:

Six months later, I was dancing in that ring like a ballerina and scattering straight lefts like summer hailstones.  It was undeniable: even though no one had ever seen a boxer with a more unsuitable body, it was as if I was born to be up there.  And since I’d started training, my piano playing had improved, too, and I was even starting to like that bastard Beethoven. 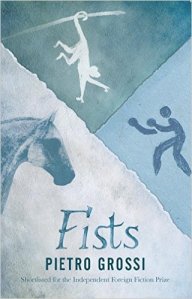 At this point there are forty-one pages of story still to be told.  They’re full of incident, detail, character development and introspection.   I forgot I was reading until I turned the last page and found myself musing over the last line.  I put the book down, feeling a little lost, now that I had to leave ‘the dancer’ behind.  I needn’t have worried, as you can probably tell, I think he’s staying with me for a while yet.

Before I pass this book on to it’s next reader, I may revisit those three stories.  Meanwhile, I’ve added Pietro Grossi to my list of authors to look out for.  If you haven’t come across him before, maybe he’s someone for you to look out for too.