I’m sorting through the papers on my desk when the office door is slung open, and in walks my mentor.  ‘So, is this what you call writing?’ she says, nudging at the heaps of notes.

I put a saving hand on the avalanche.  ‘Just clearing a space,’ I say, ‘sorting it all out.’

‘I can’t think in this muddle.’

Mentor leaves the doorway and leans past me to throw open the window, drawing in a gust of wind that scatters my tidying across shelves, floor and my lap.  All that’s left on the desk is my brand-new notebook.  ‘Look at that,’ she says.  ‘You haven’t even creased the spine yet. What would Ruth say?’

‘I would have found it.’

‘After you’d read everything on top of it.  Then what?  Lunch, I suppose, or do I mean tea?’

‘It wouldn’t have taken me that long.  Anyway, I’m saving this notebook,’

‘For something special?’  Mentor scuffs her walking boot through the drift of words on the floor, crumpling and creasing. 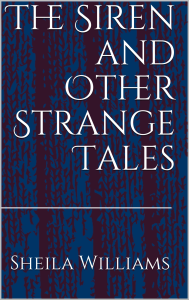 Are you looking for something new to read?  Here’s an interesting selection of approaches to the supernatural that is well worth a look at, easily downloaded from Amazon.

There are a variety of geographical and historical settings.  My favourite is the title story, The Siren, a North-East coast of England story, vividly told.  I swear I felt the draft of that wind, despite sitting in warm sunshine on the other side of the country.

Sometimes, it’s good to dance with things that defeat rational explanation, and how better to do that than in fiction?  That’s just what Sheila Williams has done.  How do I know?  Because I’ve read her blog.  Click ‘This‘ and you can too.

We don’t often get the chance to see where a writer’s inspiration came from.  This glimpse provides a few clues about how you can use what you know to write what you don’t know.  I like that.

Everything’s off.
In the white heat of construction
thoughts fail.
The computer blinks:
other words beckon,
in books and stories I wish I had written.

But too late, for time works relentless,
tick-tocks like sand particles,
granular time. In time,
on time, outside in the grass
where childhood books were consumed,
pages torn and chewed in my desire
to absorb their worlds.

Hand-me-down stories, solid stories
published by Children’s Press or Blackie
and glued to the fly leaves, glossy award plates
named and dated prize pupils
from an age of geometry, matriculation and scriptures.

Their pages were thick and soft.
I got close to those fibres
and the sharp edges of graceful alphabets,
racing from illustration to desert Island
breathless, as footsteps stretched across empty beaches
and bloody cries echoed through pristine glades
the sunshine hot on my neck.

Are you ready? I think I can write, now.

*(As mentioned in my last post, a poem read at the festival)

I think it was in February that Miki first raised the idea that the In Your Own Words Poetry Group would read at the Cheltenham poetry festival.  I know it seemed sufficiently far away to contemplate calmly.  So I put my name on the list.

I didn’t exactly forget, in the intervening months, I was just too busy to think about it.  Then, for last month’s poetry group, Miki asked us to bring three poems so that we could have a read through.  That was, I realised, a make or break moment – the time when I could gracefully back out.

There was no pressure, only plenty of encouragement.  Read slowly, was Miki’s advice.  Make time to read to the mirror, several times.  Practice is the key.

I spend a lot of time advising other writers to step forward and speak up, extolling the advantages of sharing our writing.  What, after all, was there to be afraid of?  I had three poems that I was ready to share, and it’s not often that the opportunity to read at a festival is offered.  The choice, I realised had already been made.

So, yesterday afternoon I arrived at The Playhouse Lounge half an hour early, clutching my three poems, washed, pressed and polished for my debut poetry-reading performance.  Time did that elastic-band trick it sometimes plays, stretching so, so slowly, then springing forward faster than it should, so that before I knew it I was being called to read.

I held my pages up high, and read…slowly.  I forgot the audience was there, and then I remembered them, and that I was supposed to glance around, include them.  I took a quick scan across the tops of heads, back down to the page…where was my line?  There, got it.  No way was I going to risk repeating that.  I’d look again when I swopped poems.

How could so much be going on in my head while I was reading?  I don’t know.  I seemed to absorb everything.  The quality of the  sunlight coming through the rather lovely old stained glass window, the dry air, my legs feeling as if they had run a marathon, and my voice, pacing the words, hearing them as if for the first time.  It was an experience I still cannot define, or pin down.

As I reached the last four lines of my third poem, disaster.  My throat dried, and the words were forced out over a parched larynx.  As Ray later said, the frog from my second poem, hadn’t actually left.

The one thing I had not anticipated, was the importance of those sips of water I’ve noticed public speakers pausing for at events.  As I coughed, and swallowed, I had a sudden image of the final scenes from that old John Mills favourite, Ice Cold In Alex.

Somehow, the final words were spoken, though.  It was over, and I was glad to have done it.  Despite the strangled ending, I got through.  I could sit back and enjoy the other readings.  I think we were all a little nervous, but we did it, all ten of us.

Miki took the stage to round our hour off.  With enviable sangfroid, she chatted with the audience, putting the group into context, introduced her poems and then performed them.  Her pages, it seemed, were only a prop, not her lifebelt.

Remember the days when camera’s only came out on special occasions?  We took them to weddings and holidays, and missed thousands of other photo opportunities, because cameras were bulky, fiddly and expensive.

My parents stored our developed pictures and negatives in a shoe box.  Occasionally we put some in albums, but even then, we rarely bothered to identify anything or anyone.  What was the need, we knew who we were, didn’t we?

Shuffling through them only a few years later, though, we discovered how fleeting the importance of those moments are. Who was that fourth child sitting by the sandcastle, in a green anorak?  Where was it taken?  Why were they with us?

I thought I knew some of the answers.  There was a slice of leg wearing a scarlet shoe in the right corner.  ‘That’s Aunty Deb,’ I said to mum. ‘Remember those heels?  She insisted on wearing them on the beach.  So this must be Gill.’

Mum nodded, ‘We stayed at a B&B in Blackpool,’ she said.  ‘Soggy bacon sandwiches, and the man with the kiss-me-slowly hat.’

‘That was Torbay,’ said Matt. ‘It rained for four days, and Gill cheated in our monopoly marathon.’

‘You caught her stealing from the bank and tipped the board up,’ said Matt.

Clive nodded, ‘I remember that.  We’d been playing for two days.  Gill was furious, and wouldn’t speak to you for the rest of the holiday.  The KMS-hat bloke was called Harry, and he had no thumb.  He said it had been shot off by a sniper, in the war.’

Matt said, ‘He told me he’d got frostbite while he was climbing Everest.  He said he was glad of the cold wind, as he was too self-conscious about his missing toes to go paddling.’

‘Actually,’ said mum, ‘you’re all wrong.  It was Blackpool.  That was the first and last holiday I had with Debs.’

‘Turned out Harry had followed her.  He took that photo, then they went off to buy ice-creams and we didn’t see them again until five days later as we were about to drive home.’

I said, ‘But I remember her on the beach, in those shoes.’

‘Only on the first afternoon.  It rained for the next three and a half days, and I was on my own with you four children.’

‘Posted to Germany for the summer.’  Mum sighed. ‘Poor little Gill.  I wonder what happened to her?’

‘She got stuck in our album,’ I said, as I slotted the picture into place and scribbled our names in the box beside it.