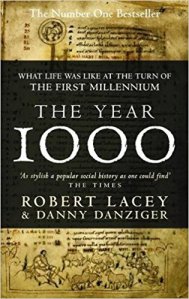 I’ve been time-travelling again.  I bought this in an Exeter charity shop, for my research shelf, a couple of weeks ago, then got stuck into it during the train journey home.  I’ve been dipping in ever since.

It’s not a heavy tome, based as it is, on a small document from AD 1020-ish, called The Julius Work Calendar.  There are twelve beautiful line drawings from that document.  They act as chapter headings.

For instance, January is titled, ‘For All The Saints’.  It explains not just how and why saints were important, it begins by building character:

If you were to meet an Englishman in the year 1000, the first thing that would strike you would be how tall he was – very much the size of anyone alive today.

…the bones that have been excavated from the graves of people buried in England in the years around 1000 tell a tale of strong and healthy folk…Nine out of ten of them lived in a green and unpolluted countryside on a simple, wholesome diet that grew sturdy limbs – and very healthy teeth.

I love this kind of detail, combined with the cartoonish drawings, it brought the book to life.

How does it connect to saints?  Well, because  there was the need to replace the:

‘…legion of little people, elves and trolls and fairies, who inhabited the fears and imaginings of early medieval folk… the Julius Work Calendar was to provide a daily diary of encounters with [saints]…’

Isn’t it beautifully logical?  It is also, of course a little more complicated, but I’d have to quote the whole chapter to explain.

This book is about the practicalities.  Here are hay-makers, from the middle of the year:

…the toughest month of the year…since the spring crops had not yet matured.  The barns were at their lowest point and the grain bins could well be empty.  Tantalisingly, on the very eve of the August harvest, people could find themselves starving in the balmiest month of all…

The rich could survive on the contents of their barns, and they had the money to pay the higher prices commanded by the dwindling stocks of food.  Grain and bread prices could soar to exorbitant levels.  But this scarcity made July the month when the poor learned the true meaning of poverty…grinding up the coarsest of wheat bran, and even old, shrivelled peas and beans to make some sort of bread.

November: Females and the Price of Fondling, addresses the fact that there is no mention of women in the Julius Work Calendar.  Documentary evidence is slight, but Lacey and Danziger interpret what there is in a positive light:

All human beings were menn, the term being used for both sexes. …In the year 1000 the role that women played in English society was more complex than surface impressions might suggest.

Using wills and divorce laws (yes, it seems people could easily, and fairly, divorce then), they provide some examples of powerful women taking control of kingdoms and religious houses.

But, what happens if a wife commits adultery? Canute’s Law 53 says ‘…her legal husband is to have all her property, and she is to lose her nose and her ears.‘  There’s no mention of what happens to the man…

Already I’m at November, only one month and a short conclusion to go, how will I survive my return to the digital age?

Actually, I might time-travel in that region again, but with a different companion.  Michael Wood’s Doomesday has been gathering dust on my shelf.