Perhaps it’s because we’ve lacked rain for two months that my attention was caught, the other day, by a reference to umbrellas in Jenny Uglow’s excellent biography of Elizabeth Gaskell.  I turn up all sorts of intriguing oddities when preparing for classes.  Some I can use, but there are always nuggets that don’t have a place in my course plan.

This one tantalises because its thrown in so casually, in reference to Gaskell’s honeymoon in Wales.  Uglow says:

At Beddgelert Elizabeth had to overcome her terror of umbrellas, at least the mundane variety.

As the old saying goes, ‘and that’s all she wrote’.

Surely I can’t be the only reader who expects such a statement to be followed by an anecdote? The biography is, in other ways, admirably explanatory.  Where possible, events are referenced by extracts from letters, they’re put into historical context, and possible conclusions are identified.  If something is being guessed, Uglow provides her justification for drawing assumptions.

I’d been involved by Elizabeth’s story, frequently forgetting that this is a non-fiction.  Call me picky, but I’ve two problems with this sentence.

First, is the inclusion of the word had. Why is it there? Uglow could have said, ‘At Beddgelert, Elizabeth overcame her terror of umbrellas.’  I’d have accepted that.

I’ve met people with surprising and unsurprising phobias, and seen how the word ‘terror’ is attached to them.  People can and do confront their phobias for all sorts of reasons. What the word had implies to me is a very specific need that forces the issue. Had, means a story, and I longed to know it.

Chekov said that if you introduce a gun into your narrative, it’s a promise, and needs to go off before the story ends. True, he was talking about fiction, and yet, don’t some of the same rules apply to non-fiction too?

Uglow’s second half of that sentence, intensifies my problem.

At Beddgelert Elizabeth had to overcome her terror of umbrellas, at least the mundane variety.

The ‘at least’ picks up the implications of ‘had’: it says, ‘by the way, here’s some ammunition.’  At least means this was not a casual event, it refers to a crisis.  Elizabeth was placed in a situation that forced her to confront a major fear (terror) and it was not an easy battle, because she only partially succeeded.  That, is the heart of most stories.

This quibble doesn’t quite stop here, I have one more question.  Forgive me if it seems a little frivolous, but I really want to know, what does a ‘mundane‘ umbrella look like, in 1832?

There are no reliable figures on how many lives they saved.. 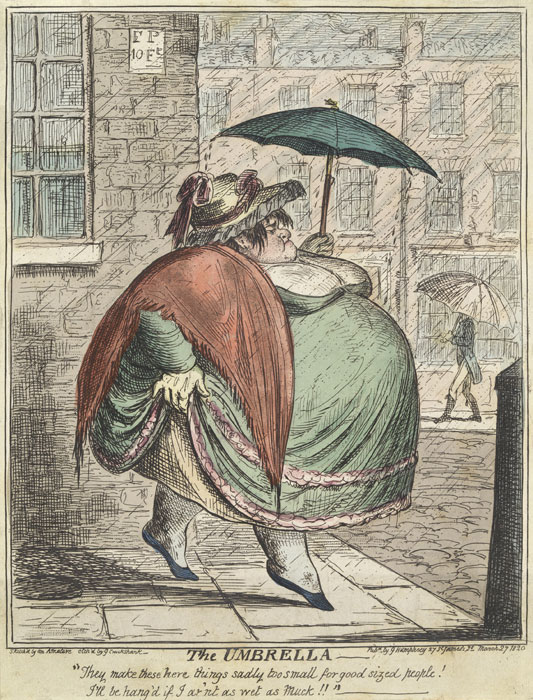