…every story that matters to a reader – every story that hums with a meaning greater that the sum of its words – was once little more than a risky act of faith for the writer.

From, Short Circuit, a guide to the Art of the Short Story (Salt 2009)

I think there are as many kinds of short story as there are writers.  So when I’m feeling insecure about spending so much of my life writing stories, and trying to get them published, somewhere, and the words won’t flow, I read.

Out of the reading I’ve been doing this week it’s not a story that stands out, though I’ve read a few good ones, it’s an essay by Alison Macleod.  Sometimes, I need to be reminded about how stories matter, and to think about my approach to writing them.  Discovering what other writers say about their processes is one way I do that.

“…the short story, though obviously short, is big.” says Alison, which is about the most succinct summing up of what a writer might aspire to that I’ve come across.  I like it so much that I’ve added it to the post-it quotes I keep on the door by my desk.  Yes, I think, those are the stories that matter, the ones that are so much bigger than their words that they stay with me.  And those are the ones we long to write, aren’t they?

I don’t care if you’re writing realism or fantasy, the principle is the same.  Listen, our words imply, I’ve got something to make you laugh, cry, think, feel…to forget for a few minutes where you are and what is around you.  That’s good.  I even feel I may be a little noble to aim so modestly.

The thing is, my modesty’s not strictly true.  What I, and I therefore assume we, hope for – secretly or blatantly – is to be noted: better yet, discovered.  I don’t want to be writing disposable prose, I  want someone to be intrigued enough by a story of mine to look for more of them.  That’s my reading pattern, after all. 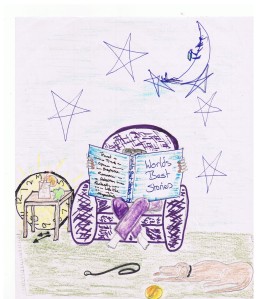 Now that’s a big ambition: an inhibiting ambition.  I can no more write when I’ve one eye on that than I can read when I’m keeping a check on the time.  The type of stories that keep me in the chair when Rusty is ready for his walk need adjectives like ‘engaging’, ‘surprising’, ‘intriguing’.  How can I possibly set my imagination free if I’m continually questioning the value of every word and action?

I can’t.  What I need to focus on is ‘the risky act of faith‘.  Alison Macleod is not just talking faith in self, she’s advocating RISK.  Writers, she reminds us have to let the story lead us.  Writers, she says, ‘need to move beyond polite conversation.‘  Yes, I think, that’s what so often pulls me up, when I’m writing, ‘What will my mother/father/neighbour think if the story does that?’

Risk is hot: it’s action and excitement. It’s not writing for effect, shocking or safe, it’s about allowing the story events to play out naturally, even if that means letting go of the idea I began with.