I’ve just been on a journey backwards and forwards in time between 1936 America and Manila in 1902 and 1936 thanks to William Boyd’s, The Blue Afternoon. It was quite a trip, all in all. Some stories the reader just hitches a ride on the words and enjoys the passing scenery. Not this one. I’ve been kept involved all the way, guessing about connections and murders, taking a new view of history, working out what’s going on, and why, and trying to second-guess how.

I’ve stood at the shoulders of an architect and a surgeon as they worked. I’ve experience 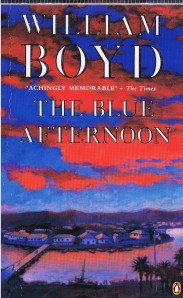 the joys, frustrations and passions of different kinds of love and loss and colonial life. There was so much story in this one short novel it would be difficult to write a summary without giving away the plot, so I’m not going to attempt that. You can find one somewhere else, if that’s what you’re after. But my recommendation, whether you’re a reader or a writer is to try this novel yourself.

I’ve not read any thing else by William Boyd, so I can’t draw comparisons with his other books.  I can only say that here, I find good writing.

What do I mean by good writing?  Well look at the first sentence.

I remember that afternoon, not long into our travels, sitting on deck in the mild mid-Atlantic sun on a slightly smirched and foggy day, the sky a pale washed-out blue above the smokestacks, when I asked my father what it felt like to pick up a knife and make an incision into living human flesh.

It’s a little long by some standards, perhaps, but look what Boyd does with it.   Besides giving us a situation, a setting and an atmosphere, it gets me asking myself, who is remembering, and why do they want to know about ‘living human flesh’?  I’m only an inch into the text and I’m already preparing to turn to the next page.

I like a lot of things about this story.  Take, for instance, weather and scenery. Los Angeles, 1936, ‘was cloudy and an erratic and nervy wind rattled the leaves of the palmettos that the contractor had planted along the roadside.’ In Manilla, ‘Cruz’s house was a substantial stone building with a tiled roof, hairy with weeds, and a saffron lime wash on the walls which was flaking and dirty.’  It’s economical.  There’s just enough of a word picture for me to create the image: not so much that I’m struggling to construct an exact replica.

Go back to that first sentence again and look at how he constructs his images.  Ever heard of a ‘smirched‘ day before?  I haven’t, and yet put it with foggy, and I think I understand exactly what he means.  Like the wind in Los Angeles, which is not just ‘erratic’, it’s ‘nervy’.  This is what we mean when we talk about keeping language fresh in our writing.  I don’t think it’s forced, and it doesn’t need to happen in every paragraph, or even chapter.  Its effect is made, at least in part, because it is unexpected.

For me, ‘unexpected’ is the key to my enjoyment of this novel.  The story unravels slowly, truths are teased out by our narrator, and, for the most part, delivered in such a way that I do not feel cheated: by which I mean that the author has not manipulated events to achieve his goal.  Here, the twists in the plot felt feasible rather than engineered, even when they were surprising.  They arose naturally as a result of the characterizations.

Here’s a story with some big events in it.  Things that told clumsily could have looked contrived and ridiculous.  Instead, there was a sense of inevitability about the way they unfolded and the final denouement.  I don’t think I can give a higher praise than that the ending surprised, pleased and stayed with me, long after I’d closed the covers.