Old Spike Milligan, that mixed bag of indulgence and genius, lands on my lap: another hand-me-down from a nostalgic neighbour. 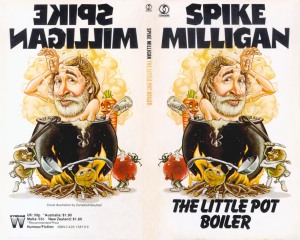 ‘Never saw much in him at the time,’ my neighbour says. ‘But there’s some good stuff in there, all the same.’

Never turn away a book without a flick through, think I, accepting the poor old thing. ‘Thank you,’ I say.

My neighbour nods.  ‘I think you’ll like it,’ he says.  ‘There’s not many pages.  A useful book for keeping in the bathroom.’  I’m beginning to feel a bit Milligan myself, as I wave goodbye to my neighbour.

I put Spike down beside Middlemarch, the reading I’m supposed to be doing ready for my Autumn class. Six-hundred and eighty two pages versus ninety six.

As for the ink taken, well, no comparison between the densely printed Elliot and Milligan’s book.  Half of his pages are given to cartoons – one of which depends for its joke on facing a blank page, and many more are poems.

Judging by the state of my copy, Spike’s been company for a few baths since he was published in… 1963, would you believe?  The cover is battered, and the glue on the spine has got brittle: most of the pages are either loose, or hanging by a corner to the rest.  I can’t imagine passing this one on again.  What am I to do with it?

Do I like Spike Milligan?  I’ve never read him, though he seemed to be on the tv a lot when I was growing up.  Did I like him then?  I’m not sure.

I like my neighbour though, so I flick through the pages again.  The paper is yellow and brittle, but I find this:

Things that go “bump!” in the night,

Should not really give one a fright.

It’s the hole in each ear

That lets in the fear,

That, and the absence of light! 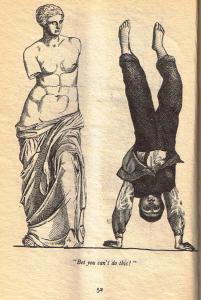 I’m not sure whether I can do that.  But I know I’ve got more chance of something like it if I’ve got access to Spike’s writings and drawings.

So, that’s it, then.  No chance of slipping this one in amongst the recycling.  My neighbour may not be a reader, but he knows a keeper.

I am a home for tired books.

An Owl at the Window...
Mr McHugh's English Notes

Mental health right at your fingertips