What ho, folks.  This week I’ve been reacquainting myself with that great wag, PG Woodhouse.  As usual, it’s only on reading him that I remember how much I like the old fellow.

Yes, he may be a little dated, on first glance.  Mostly he’s skipping through the 1920s and 30s with a series of bright young things.  Is he aware of the general state of the nation? It’s not easy to argue in the positive on a broad scale, though it’s possible to look between the lines and find some social commentary.  Picking it out is one thing, deciding on whether that’s a key part of the writing is altogether another game.

If he’s not, does that matter?  Aren’t the bookshops and library shelves crammed with historical fiction intended only to entertain us?  So really, he’s just one more, with the added bonus that his stories aim to raise a smile.

I admit, it’s an old-fashioned style of smile.  Think early rom-com films with wisecracking pairings like Cary Grant and Katherine Hepburn, or Clark Gable and Claudette Colbert. Realism is not the intention, this is about sitting back and enjoying the ride.

Try this excerpt from a classy piece of Wodehouse, The Reverent Wooing of Archibald.

People who enjoyed a merely superficial acquaintance with my nephew Archibald (said Mr Mulliner) were accustomed to set him down as just an ordinary pinheaded young man.  It was only when they came to know him better that they discovered their mistake. Then they realised that his pinheadedness, so far from being ordinary, was exceptional.  Even at the Drones Club, where the average of intellect is not high, it was often said of Archibald that, had his brain been constructed of silk, he would have been hard put to it to find sufficient material to make a canary pair of cami-knickers. 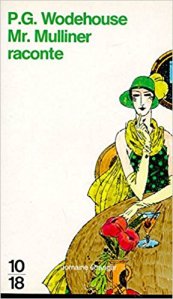 All would be well, if the purpose of Archie’s life continued to be seeking out new designs of sock for his collection.  But one day, as he’s sitting at a window of the Drone Club, sipping a cocktail and looking out on Dover street, ‘there swam into his line of vision something that looked like a Greek goddess.’

Are you hooked, yet?  What I love about this story is that it has style, and elegance.

There are two narrators.  The outer, omniscient one, is economical.  Just look at the neatness of his opening sentence:

The conversation in the bar-parlour of the Angler’s Rest, which always tends to get deepish towards closing-time, had turned to the subject of the Modern Girl; and a Gin-and-Ginger-Ale sitting in the corner by the window remarked that it was strange how types die out.

It’s long, but there’s an awful lot packed into it, and really, no more is needed to set the scene, is there?  After this, we’re moving forwards into the story.

Soon Mr Mulliner takes over the narration, and adds his distinctive turn of phrase to that economy, as in the description of his nephew Archibald, quoted above.

As for that tricky business of introducing a clutch of secondary characters into your story without confusing the dear reader, has anyone ever bettered Wodehouse’s decision to define them by their drinks?  It allows him to add in a ‘Draught Stout’, a ‘Small Bass’, and ‘A Double-Whisky-and Splash’, and even though in a page or so they’ll disappear from the rest of the narrative we’ve not expended enough energy on them to regret their absence. That’s what I call a witty solution.

So, dated or not, I think this old boy still has a few tricks we can learn from. And if you’ve not read him before, The Reverent Wooing of Archibald is a good place to start.